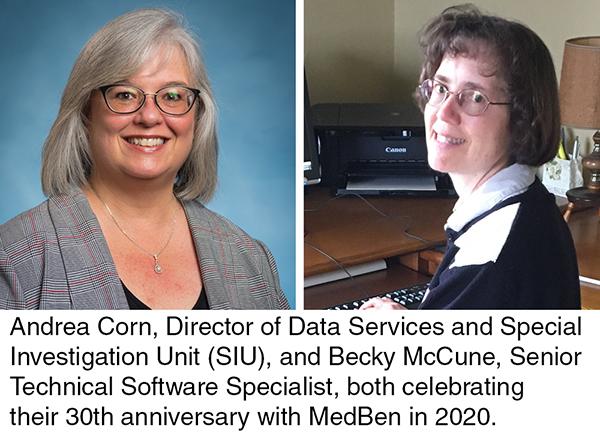 At this year’s annual employee recognition event on September 11, MedBen employees who reached anniversary benchmarks in 2020 were honored.
Among those celebrating – Five-year anniversaries: Sara Burton, Bethany Peters, Betsy Rainbolt, Daryl Roudebush and Pamela Santos; Ten-year anniversaries: Veda Adkins, Tammy Cowles, Stacie McFarland, Ed Nydegger and Tabby Perone; Fifteen-year anniversaries: Teresa Cass and Chris Montgomery; and Twenty-year anniversaries: Dominga Celestino, Brian Fargus, Debi Felumlee, Mandy Hays, Tracie Lesko and Laura Smart.
Finally, MedBen employees Andrea Corn and Becky McCune are celebrating thirty-year anniversaries in 2020.
Andrea Corn started at MedBen in 1990 as a claims examiner trainee, eventually working her way up the ranks to management positions in the claims and information systems departments. In 2015, she was named Director of Data Services and Special Investigation Unit (SIU).
Asked what she enjoyed most about working at MedBen, Corn replied, “Besides the people that I work with which is very important to me, I like working for a company that has such integrity and values the employees as much as the clients. It also doesn’t hurt that MedBen offers a comfortable work environment as well as a sense of humor!”
Becky McCune joined MedBen as a Computer Programmer Trainee and now serves as a Senior Technical Software Specialist. As MedBen has expanded its technological capacity, she has played a key role in many major projects, such as developing and maintaining the MedBen VisionPlus system, customer service doc system and benefit config system, and recently serving as a team member on a project to streamline eligibility data loads. She also enjoys helping users with software issues.
Now working primarily from home due to the pandemic, McCune says she’s adjusted well to the new routine… “but I do miss the interaction with my fellow co-workers.”