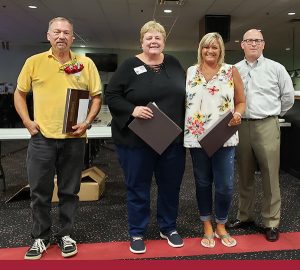 Each year, MedBen takes an afternoon to recognize employees and hosts a company-wide social event. At this year’s event on September 13, employees enjoyed a great lunch while honoring co-workers who reached anniversary benchmarks in 2019.

Lori Kane has actually been with MedBen for 31 years, starting in 1988 as a temp helping various departments. But when MedBen established a third-party administration subsidiary a year later, she was one of its first two employees. Her various responsibilities in the ensuing years included submitting stop-loss claims, running quotes and writing plan documents. She also carries the distinction of being MedBen’s first – and at that time, only – Group Service Representative (now Account Representative). Kane commented that one of her favorite things about working for MedBen is “ [working] for a company who honestly cares about their employees and clients… You are not a number at MedBen; You are a valued member of the staff.”

Rick Snoor’s MedBen journey has taken him from the Administration Department’s Customer Service Representative to Underwriting, and finally to his current position as Office Services Manager. He says he likes working at MedBen because it is “a relaxed environment” and “everyone is like your extended family instead of co-workers.”

Cindy Dittoe has served in a variety of roles since 1989, from a Premium Administrator to the Supervisor of the Group Service Department, before settling into her current position as Information Coordinator in 2003. When asked to remark any personal thoughts she had about her time here at MedBen, Dittoe stated “I have grown up at MedBen and when looking back 30 years, it is amazing the changes and growth of this company.  I am very proud to be a MedBen Employee.”